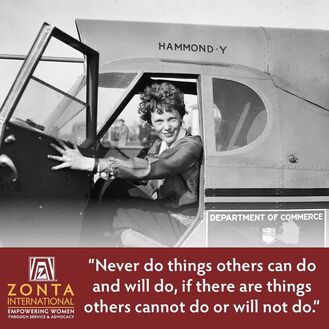 ​Zonta International celebrates the spirit of Amelia Earhart and AE Fellows. One of the most well-known Zontians, Earhart pushed girls and women to explore the world of science and engineering.

​On 11 January 1935, Earhart embarked on a 2,408-mile trip to Oakland, California, from Honolulu. The next day, she became first person to fly across both the Pacific and Atlantic oceans. This trip also made her the first person to fly to the United States mainland from Hawaii.  To commemorate these remarkable achievements, Zonta celebrates 11 January as Amelia Earhart Day. This day, we remember her contributions to the aerospace industry, as well as the empowerment of women in science.

Zonta International and the United Nations

​Since 1946, Zonta International has been closely linked with the United Nations and since 1985 has had general consultative status with the Economic and Social Council (ECOSOC), one of six principal bodies carrying out UN work. Through this relationship and our UN Committee representatives in New York, Geneva, Paris and Vienna, Zonta is able to bring women's perspectives to efforts to improve education and health conditions and promote respect for and observance of the human rights and freedoms of people to the UN.

Zonta International is on the front lines of global and local efforts to help women overcome barriers to equality through education, service and advocacy programs. Each year, Zontians dedicate hundreds of thousands of volunteer hours and millions of dollars to these efforts.

The Zonta International Foundation raises, invests and distributes financial support for the charitable and educational programs of Zonta International, serving as a catalyst for greater service to women throughout the world.
"
DONATE NOW
"